I have a copy of Circle of Iron on Blu-Ray, and IMHO, the best feature is a thirty minute interview with Joe Lewis.  While stationed in Okinawa during his stint in the US Marines, Joe Lewis earned three  Black Belts in three different systems, including Okinawan Kempo.

He also had some interesting statements on why he got called in to reshoot most of the fight scenes after the principle photography was shot.

I like the movie, but the Joe Lewis interview really is the best part of the Blu-Ray release.
Posted by Mark at Sunday, November 25, 2012 No comments: Links to this post

MetroWest Martial Arts and Wellness is having a Black Belt test today!
Posted by Mark at Saturday, November 03, 2012 No comments: Links to this post

Earlier in the year, I was out on the left coast and stopped by the Shaolin Kempo school my nephew studies at.  It's the Twin Tigers Academy of Self Defense in Brentwood, CA.

I had a good chat with the head instructor.  He is an old Shaolin Kempo guy who studied with Charles Materra, so our lineage is really similar.

If you are out that way, and are looking for a good Kempo school, stop by Twin Tigers!

"Firm footwork is the fount from which springs all offense and defense."


Good Advice for any Martial Artists
Posted by Mark at Monday, May 07, 2012 No comments: Links to this post

I've been listening some of the Martial Arts Lineage Project podcasts and there are two with Kempo instructors.

The first was with Senior Grandmaster George Pesare, the man who brought Kempo to the East Coast.  Grandmaster Pesare was Nick Cerio's Kempo instructor and the first person to promote Cerio to Black Belt. A lot of good "no shit, I was there" history in this interview.

The second was with Shihan John James. Shihan James was a personal student of the late Grandmaster Nick Cerio and was one of the people selected by Cerio to be on the Board of Directors of Cerio's Kenpo after Cerio's death in 1998.  I exchanged several emails with Shihan James around that time.  He was always polite and very much a gentleman of the old school.  That came across in this interview.

I recommend listening to them both.
Posted by Mark at Saturday, March 10, 2012 No comments: Links to this post 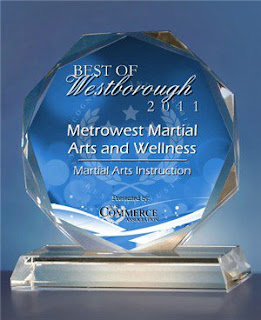 A clear choice, and not just because I am one of the instructors there. :-)
Posted by Mark at Monday, January 23, 2012 2 comments: Links to this post